IntraWeb is Old, Yet New

We’ve been around generating HTML, JavaScript and CSS since before JavaScript was a language taught at boot camps. We made it possible for desktop programmers to write web applications with the same functionality as AJAX – 20 years ago before AJAX existed. IntraWeb’s umPartial was the first AJAX! And we are always innovating and keeping pace with new technologies.

Compared to the JavaScript framework world in which frameworks rise and die every few years at best, how many other web development tools have been consistently maintained and updated for such a long life? Is anyone still using ColdFusion, classic ASP, Hahtsite or Perl? Webbroker or WebSnap? IntraWeb has withstood everyone of these “IntraWeb killers”.

We think only PHP may be able to make this claim. If anyone could find a developer who actually likes PHP, then there may be a point to be had here.

IntraWeb has been around since 1994 (yes, the first IntraWeb predated Delphi 1.0….). IntraWeb offers you stability without the need to move to a new framework every year or two because the framework you used is no longer “cool” and is no longer being maintained.

Sure we’ve had changes because of browsers, servers, security standards and more. But we have always minimized those impacts to our users by abstracting them.

It can be lonely at the top. But in the past year or so a couple of companies have decided to take a stab at creating a similar framework. Judge for yourself what they are actually offering. We’ve been working with and listening to our customers as they use our product for the most amazing sites for years now, and IntraWeb has evolved to reflect those users’ desires. And we continue to do that.

IntraWeb 14.0.0 was released in 2011. Despite this, and despite our offers of free upgrades, Embarcadero all the way through 10.3 Rio continues to ship 14.0.0 which is 8 years old. IntraWeb current version is 15.

This then creates a problem with sales reps and MVPs who then label IntraWeb as “old and outdated”. But of course if you ship an 8 year old version of a product, what do you expect? In fact we have continued to offer FREE updates on our website for such users.

Imagine if we were to be a reseller of IDEs and we sold Visual Studio 2019, but Delphi XE2 (2011) and simply told customers “Buy Visual Studio, Delphi is OLD”. This is exactly the position IntraWeb was put in.

Take a look at this screenshot from the Rio 10.3 documentation. The lack of updates to such items is being used by some of our competitors to spread FUD. 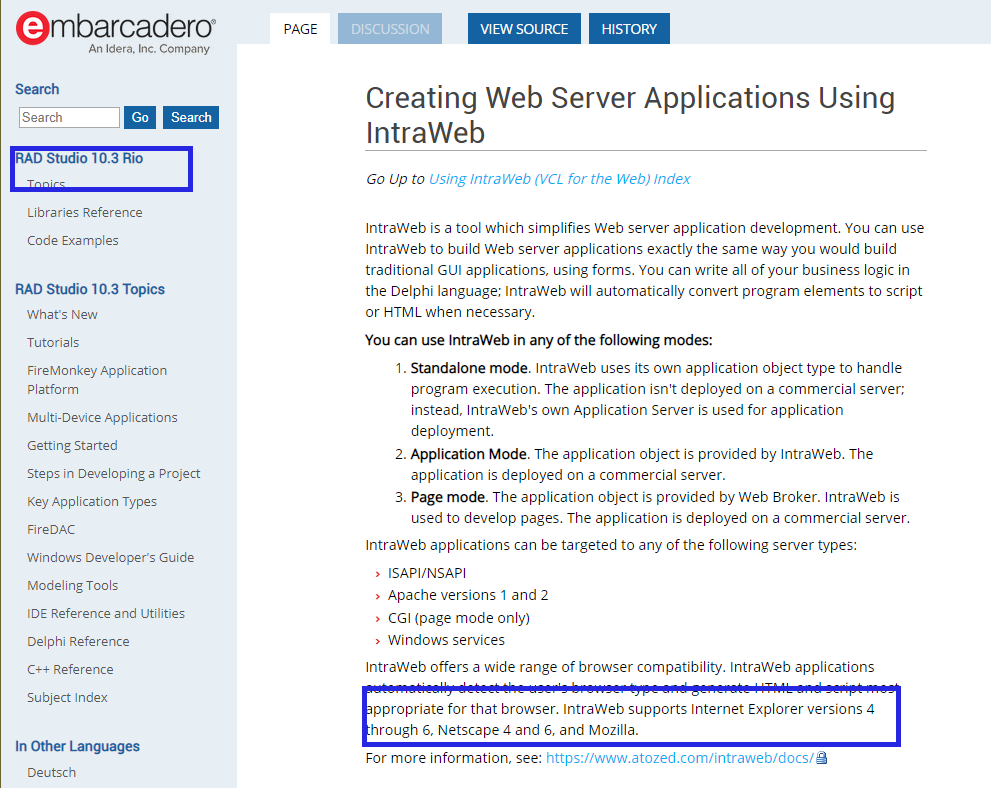 What we’re about to release is truly groundbreaking. What we did to bring desktop-like development to the web, we’re now doing to bring single-page web development to that same platform. You’ll still be able to write the current server-side code that generates web application code. But now you’ll be able to design JS-based web pages that run on the client – using the same type of editor, in the Delphi IDE.